It’s time to shatter the system — the epic conclusion to Black Ops Cold War Zombies, groundbreaking changes in Verdansk, and the ultimate showdown between Adler and Stitch await in Season Six. Plus: The Haunting lurks in the shadows… 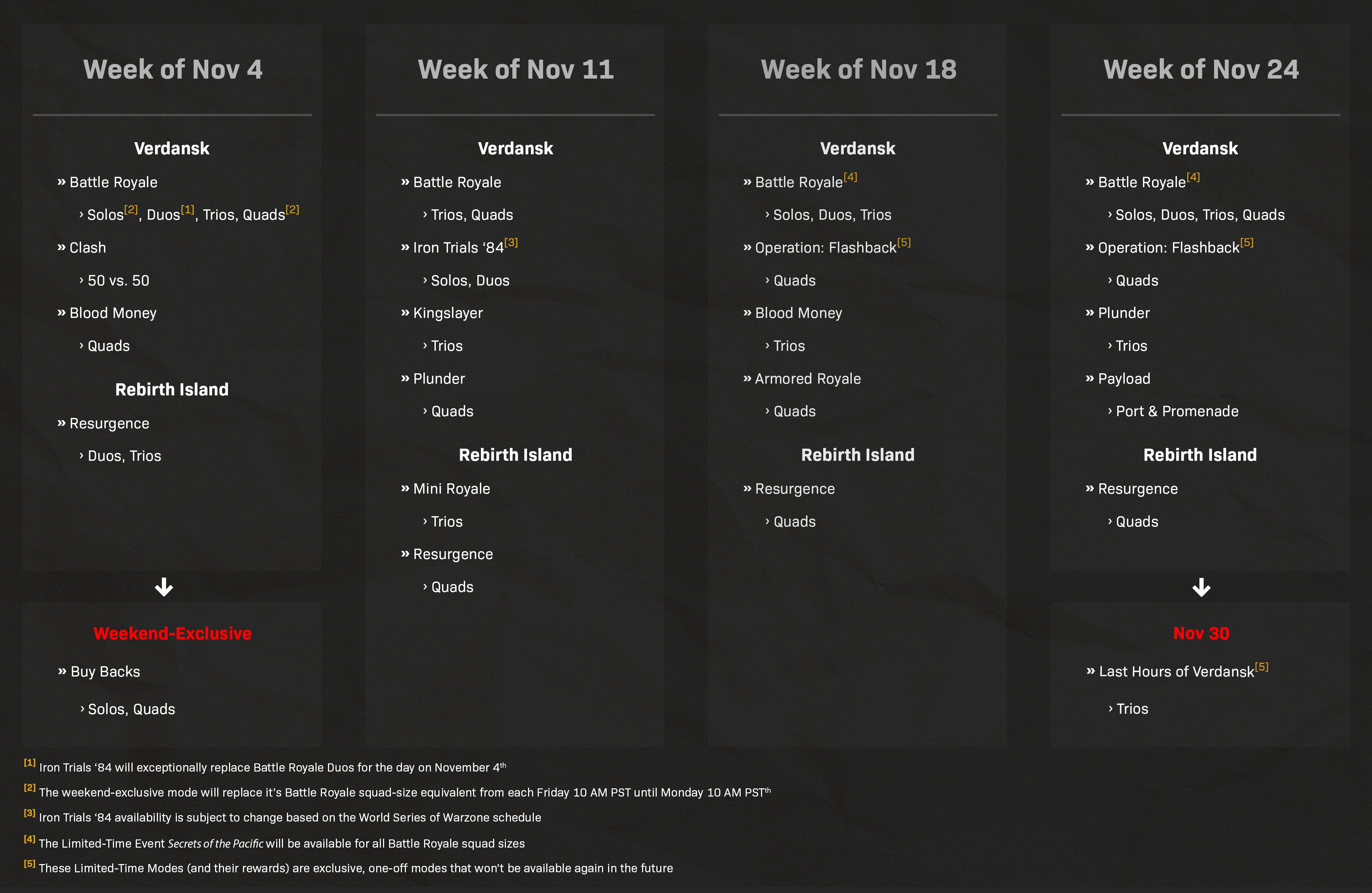 As of now, we will be using a new Warzone-only Trello board to aid us in our endeavor to improve the quality of our communication with you, our community! We hope that this board, alongside our continued Twitter updates, will keep you all as informed as you need to be.

The type of information you can expect to find on this new board includes:

Check out the new board here: https://trello.com/b/ZgSjnGba/warzone

Thank you to our friends at Treyarch for the shared real estate over the past year.

Featuring the “Ghosts of Verdansk” limited-time mode, The Haunting in Warzone brings Verdansk back under nightfall. Completing The Haunting’s challenges will unlock the prototypical LAPA (BOCW) – the first-ever ranged weapon event reward – which will also have a unique Weapon Blueprint available in the Store alongside Halloween-themed Bundles.

The Ghosts of Verdansk

For this year’s event, we’re turning the lights down and the fear way up.

Let’s set the stage... Players become Ghosts on death but can redeploy as humans by collecting three Souls. Ghosts have all sorts of spooky abilities. Be the last team with a human alive to win.

Here’s a closer look at what you need to know:

This mode introduces a new meter known as Fear, located on the bottom left portion of the HUD. As you play, manage your Fear level to avoid [REDACTED]. Once you hit 50% Fear, [REDACTED] will begin. The higher your fear, [REDACTED].

Fear increases naturally over time and when the following events happen:

Outside of experiencing [REDACTED], Fear also decreases when the following happens:

No more Gulag. Instead, as a Ghost, use your abilities to gather Souls dropped from the dead and redeploy back as a human. If you die as a Ghost, your Squadmates can still buy you back.

Ghosts have no weapons, but they have some supernatural abilities:

It’s all about survival.

All Players outside of Squadmates can be attacked by Ghosts, but they do have a safe space to take solace in: Sacred Ground.

Marked by a glowing blue circle and beam of light, as well as an icon on the mini-map, these areas are protected by a supernatural magic that prevents Ghosts from crossing over. However, Ghosts can damage the area by throwing their spectral bodies at it, and if they ram themselves into it enough times, they can destroy that plot of Sacred Ground.

Keep your fear in check, use Sacred Ground, and ensure one of your squadmates is left alive as an Operator to win Ghosts of Verdansk.

Keep your eyes and ears open for Red Phones across Verdansk.

Last weekend, we let you pick your 3 best squad mates. This weekend, you only choose 2. Time to decide who made the cut!

This Weekend-Exclusive Playlist went live earlier today at 10 AM PST and will remain live through Monday, October 11th, at 10 AM PST.

The same changes that were implemented for Quads last week will be applied to the Trios version of Iron Trials ‘84.

Below is a recap:

The trials are back… now with more friendships on the line!

Grab your three best squad mates and drop back into Verdansk for three days of blood, sweat, and tears (of joy… or probably pain).

This Weekend-Exclusive Playlist will go live today at 10 AM PST and remain live through Monday, October 11th, at 10 AM PST.

The following changes are exclusive to the Quads version of the Iron Trials ‘84 mode.

Be sure to hydrate and good luck!

Below are some of the items included in the Season Six Battle Pass:

Return to the Call of Duty blog on October 18 for more intel about the upcoming Halloween celebration across Warzone and Black Ops Cold War.

Scopes and Scatterguns, The Rebirth Of...!

Get up close and personal… deal death from afar… spend a lifetime reloading between bolts... the choice is yours! Scopes and Scatterguns returns to Warzone - with a new twist.

Here’s what you can look forward to:

This returning mode will go live during the second week of Season Six on October 14th. Keep an eye on our Twitter for weekly Playlist updates!

New Gulag, inspired by the Original

We are pleased with the level of Weapon variety we are seeing across Verdansk. However, we still feel there are some persistent outliers that could stand to be addressed. Outlined below are a few deceptively impactful changes to assist in further widening the pool of viable Weapons.

Season Six offers four additional Prestiges to achieve across the first 200 levels, as well as a new Weapon Blueprint:

This Bundle includes the first Weapon Blueprint for the new Battle Axe (BOCW) Melee Weapon — the menacing “Barbarian’s Axe.” This Bundle also comes with a devastating “Executioner” Finishing Move, three cosmetic items for your profile and Weaponry, and a Tier Skip for the Battle Pass.

New Operator “Fuze” will also find his way to the Store during Season Six’s launch week, arriving less than a week out from The Haunting.

This includes two Skins, two Weapon Blueprints, an Animated Calling Card and Emblem, and the “Can Opener” Weapon Charm.

Pick this one up in the Store, and see how this retro-looking Shotgun Weapon Blueprint electrifies the undead masses to kingdom come.

This includes two Legendary Operator Outfits: the clown-faced “Sad Face” for Garcia and the graffiti-inspired “Sign Painter” for Wolf. Five Weapon Blueprints are included – four of which are ranged Legendary Weapons – as well as a variety of cosmetic items. To top it all off, you’ll also get 5,000 COD Points, which can be spent on a Bundle, Battle Pass, or in-game gifts to friends.